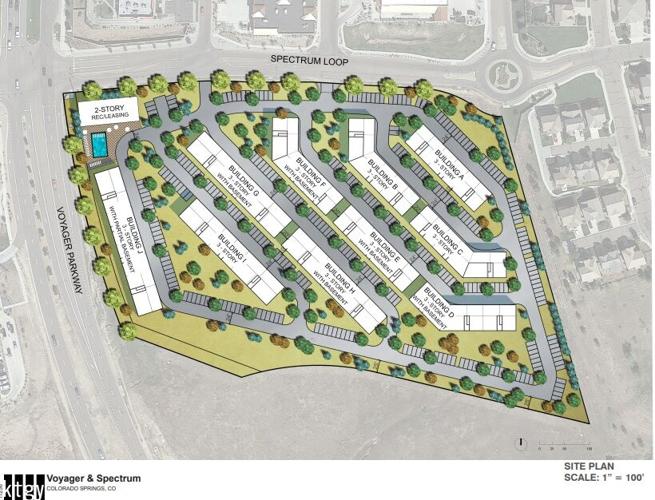 On Tuesday, The City Council approved plans to build hundreds of new apartments in northern Colorado Springs, overturning a previous decision by the planning commission to deny the project they said posed worsened traffic woes and was inconsistent with city documents guiding development in the area.

The council voted 8-1, with Councilman Bill Murray opposed, to allow a zoning change and approve a proposed concept plan to build 344 apartments on an approximately 12-acre parcel at the southeast corner of Spectrum Loop and Voyager Parkway in Northgate.

"I think this will make our community a better place," Councilman Randy Helms said.

Developer Chapter Two Investments LLC and its representative N.E.S. Inc. on Tuesday presented the City Council modified plans to build 344 apartments — approximately 29 units per acre — in 10 three-story buildings ranging in height from 38 feet to 43 feet. The site is located in a mixed-use area surrounded by both residential and commercial development, where multi-family residential development is permitted and is consistent with the city's master plan, they said. 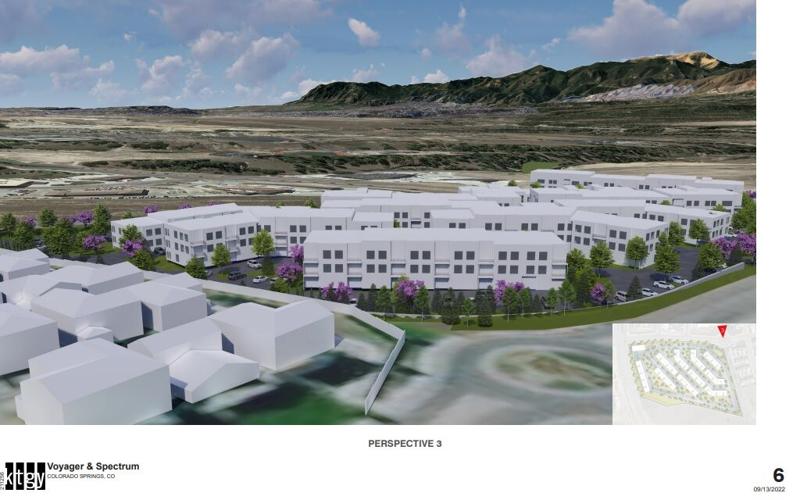 Residents opposing the project Tuesday were largely concerned it would worsen traffic in the area, particularly in the westbound left turn lane at the intersection of Spectrum Loop and Voyager Parkway.

"There are already consistent issues with traffic backing up in the left turn lane into through traffic during peak hours," said resident Jason Campbell, who lives in the adjacent Greyhawk single-family residential neighborhood. A traffic study conducted by planning and design engineering consultant Kimley-Horn acknowledges that, he said.

Kimley-Horn traffic engineer Jeff Planck said following the Aug. 10 planning commission meeting the firm conducted an expanded traffic study in response to resident concerns about roadway congestion. The updated study shows the proposed development will generate about 2,012 daily trips on weekdays — 164 of those trips during the morning peak hour and 173 during the afternoon peak hour. The analysis showed the proposed Spectrum Loop multi-family project can be "successfully incorporated into the existing and future roadway network without any adverse impacts on adjacent streets or intersections," planning documents show.

The congestion residents like Campbell are concerned about is a "lane utilization issue," Planck said. The traffic study shows nearby key intersections should all operate satisfactorily during peak hours with existing lane configurations, he said.

The westbound turn lane is already at its maximum length and can't be extended, so implementing left-turn phasing at the westbound approach to the intersection of Spectrum Loop and Voyager Parkway could reduce vehicle queuing time there, he said.

Residents said developers did not present a plan that accounted for increased traffic should a proposed 8,000-seat outdoor amphitheater in the nearby Polaris Pointe development earn approval.

"I want to emphasize that is still a proposed use," Andrea Barlow of N.E.S. said. "It's not normal in a traffic study for us to consider something in a future plan rather than a currently approved plan."

The traffic study also showed multi-family use at this site will generate less traffic than other office, industrial or commercial uses would, she said.

Other residents questioned how affordable the new apartments would actually be. The comparable FalconView apartment complex near Voyager and Interquest parkways, built by the same developer, is advertising one- to three-bedroom apartment buildings ranging from $1,689 a month up to $2,819 per month, according to its website.

"What message are we sending here?" said Taryn Griggs, who also lives in the Greyhawk neighborhood. "This is not diversity. ... High-density housing does not bring a diverse environment. A diversity of housing options does."

Speaking in favor of the project, Apartment Association of Colorado Executive Director Laura Nelson said housing of all kinds is needed in Colorado Springs and El Paso County. Rising interest rates have priced many people out of their homes, she said.

"These $2,200 a month apartments are their only option. There are no houses to buy or they can't get approved" for a loan, she said.

Some people also don't want to own a home and would rather live in multi-family housing, she said.

Residents said they were also worried local schools did not have the capacity to take on more students and wanted to see more park land in the area.

Academy School District 20 said it did not have capacity concerns, Barlow said.

The developer will also provide fees in lieu of park land, she said. The city could decide to use those fees to support developing or improving existing parks, such as the still undeveloped Greyhawk park located east of the proposed project, she said.